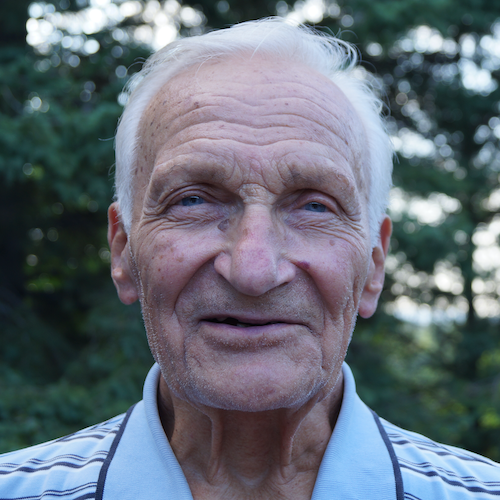 Fulda, Gottfried Hermann, went home to be with his Lord, peacefully, at Glen Hill Terrace in Whitby, Ontario, on Saturday, April 30th in his 97th year.

Born in Stuttgart, Germany on June 26, 1925, he is survived by his beloved wife Rose of 68-1/2 years, his children Carl (Margitta), Peter (Janell), Margrid Legg-Michel (Bert). Also survived by six grandchildren and seven great-grandchildren, and brothers, Reinhard and Friedrich in Germany.

Gottfried is predeceased by his son Bernhard and his three sisters, Esther in Germany and Hanna & Heidi in Switzerland.

Gottfried met Rose in May 1950 at agricultural school. They were secretly engaged till Christmas that year, when it was made official. They were married in Friedrichshafen, Germany on November 1, 1953. In June 1954, promising to work at least one year on a Farm, the newlyweds immigrated to Canada with $5 to their names. They settled on a farm in Thornton, Ontario. Gottfried later worked in a sheet metal processing facility in Streetsville, Ontario. There he could utilize the technical and layout skills he learned in Germany. He spent the rest of his career in the metal industry in the Burlington area.

Their firstborn son Bernhard was born in Barrie ON and later the couple took residence in a farmhouse in Erindale, now Mississauga, where Carl and Peter were added to the family. Tragically Bernhard was killed in a car accident at 5 years of age. They grieved deeply and continued to trust God. Margrid was added to their family a couple of years later. Here, they also worked part of the land and practiced their hobby farming.

With their eyes on the future, Gottfried and Rose bought a 20 acre parcel of vacant land on Appleby Line in Burlington. Gottfried used his architectural skills (his father was an architect) to draft the plans for a house and garage to be built there. He did much of the building with his own hands, including many items of furniture. Since December 1966, this home has provided a park-like setting for his family and friends. Hermann and Rose continued to hobby farm, building a barn in 1978. For grandchildren and great-grandchildren the farm has become a favorite retreat. Gottfried is remembered and admired for his tireless work. For years he worked a regular full time job while also working his farm.

His love for singing kept him active in several choirs well into his senior years. He was a long-serving member at Holy Cross Lutheran Church, on Lakeshore Road in Burlington.

Gottfried was hospitable, kind, a gentleman, and quick to forgive, even in his declining years when dementia increasingly hampered his life. His wife and family are blessed by their memory of him.

In accordance with his wishes, Gottfried’s body was cremated. A visitation will be held at Holy Cross Lutheran Church, 3455 Lakeshore Rd. Burlington, on Saturday May 14,2022 at 10:00am. A memorial service will follow at 11:00am. Following, friends and family are invited to a light lunch at the church. A private family interment will be held at a later date.

Notes of Condolences about Gottfried

Rose, Hermann and my family belong to Holy Cross Lutheran Church. Hermann always enjoyed talking to others there but when he spoke to or greeted the ladies, he displayed a very gentlemanly approach. He would reach out to supposedly shake one's hand but immediately would gently raise our hand, and delicately kiss it, just as was done in days gone by. This was always done respectfully and in a dignified manner, making me feel appreciated. Hermann was a true gentleman and endeared himself to me with his kindness. He had a big heart that touched many and we will miss him greatly.

Herman was always working on their property and he was such a gentleman. My wife and I will miss him.