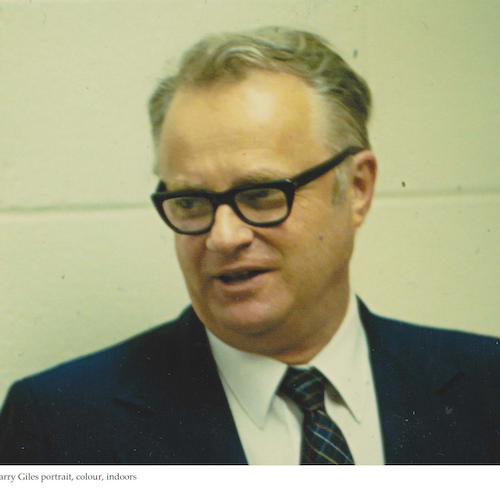 Harry was born in Windsor, Ontario to George B. Giles and Hazel Viola Barwick.

When Harry was young, his parents separated and he, with his big brother George and younger brother Jack, was sent to Tiverton, Ontario to live with their grandmother on and off for several years. During that time, the three of them went to a one room schoolhouse and developed a love for their grandmother that never abated, along with a love for her Parker House rolls.

The three boys later moved with their father to Toronto and lived in the Beach area for the rest of their childhood, first on McLean Ave, and then on Beech Ave. He and his brothers attended Williamson Road Public school and later Malvern Collegiate, where Harry insisted he played a duet with Glenn Gould. As young boys, all three of them were up daily at 5 am delivering newspapers, working at the Fox cinema and helping to support the family. Harry's nose was always in a book, bumping into telephone poles on his walk home from school and being protected regularly by his brothers. He loved baseball and was a lifelong supporter of the Toronto Blue Jays.

After graduating, Harry went to University College at the University of Toronto. To put himself through university, he joined the Canadian military and spent his summers in Shilo, Manitoba, eventually training soldiers himself. It was at university where, when directing one of many plays at Hart House in 1951, he gave a small part to one of the actors to whom he was very drawn, Anna Por. She became his wife in 1954. They had three children together: David, Kathy, and Christa.

Harry completed a law degree at Osgoode Hall and worked for a few companies before opening Giles Sillars Law with his brother’s friend, John Sillars.

Harry and Anna were committed to providing their children with the advantage of a bilingual education as Anna, of Hungarian/Czech descent, was multilingual and could not understand why Canadians only learned one language. He and Anna (a psychologist) co-founded the Toronto French School in 1962, hiring a French teacher to teach six children, including their eldest David, in their basement. It was the first French immersion centre in Canada, spawning and supporting the instructional methods for French immersion that would emerge across the country. When the first publicly-funded Canadian immersion program opened, educators from Montreal came to visit and learn their methods. The TFS was also the first non-denominational, co-ed private school in the city. Children were also taught Russian, Latin and later had the chance to learn Chinese. Harry was proud to be its headmaster for over 20 years.

Throughout this period, he and Anna both studied to get their Masters in Education from U of T. They also became quite fluent in French themselves.

Rental facilities became necessary as the school grew and by 1966 six campuses were set up across the Toronto area, including one in Mississauga. They used the spaces they could find, ranging from synagogue basements, to skating locker rooms, to Jewish day school facilities. School yards were in arenas, parking lots or on rooftops. Despite these challenges, Harry and Anna actively worked together to fulfill this dream they shared. Harry continued to work as a lawyer during this period to help to finance the school’s growth, and he and Anna worked for free for many, many years to ensure its stability.

In 1971, Harry and Anna found a house on Mildenhall Avenue and constructed the branch in that location - known as Mildenhall - which opened in 1971, and its students finally had more conventional classrooms.

Harry established several pre-university competitions, including the Canadian Chemistry and Physics Olympiads. Harry also started the first GCE Ordinary ("O") and Advanced ("A") examination centre in Canada. He assisted in the creation of the International Baccalaureate and established its first examination centre in Canada as well. He participated actively in worldwide education communities including representing Canada at the 2nd, 3rd and 4th International Curriculum Conferences.

In 1989, Harry opened The Giles School, again starting small and growing over time. It now has its own site at York Mills and Leslie. At that time, he hired some wonderful teachers, including Sharon Isac, who became his lifelong, loyal friend.

Harry and Anna had a profound and lasting impact on education in Canada.

Harry received membership in the Order of Canada in 1973 for his initiative in creating and directing the first private school in Toronto offering instruction in the French language. He also received the Queen's Silver Jubilee medal and the Commemorative medal from the Government of Canada.

Harry was a Queen's Counsel and worked as a lawyer for most of his life, including working as Swissair’s counsel in Toronto. He wanted to change the world, founding a magazine known as the International Review which survived a few years, starting a pub in the 1980s to help a friend, and serving for a period of time as President of a chemical company he helped to found. He was very proud of the plays, poems and books he wrote. He never stopped seeking the “next great thing” and dreaming. He was profiled many times by newspapers around the country over the years.

Harry was a brilliant man (as he regularly reminded us). He had endless drive and energy and regularly worked more than 16 hours a day. He had a strong belief in himself and in his visions, was single minded in his approach, and frequently multitasked, embarking at the same time on a number of businesses and initiatives. He read voraciously for pleasure, was an insatiable learner, and seemed to remember the details of everything. He moved towards a target and could not be dissuaded by anyone.

Opera and classical music were his constant companions, always at high volume. He wrote hundreds of scathing letters to editorial boards, political candidates and parties, heads of countries and companies, including all the telecommunications companies in Canada, whom he despised.

Harry was passionate about the achievements of students at the TFS and the Giles School, endlessly proud of its teachers, who were like his family in many ways, and deeply interested in the old masters in every art form. He had little time for contemporary anything.

It is hard to believe that such a force of nature could eventually succumb.

Harry never recovered from the death of his wife in 1975. For 46 years, he actively grieved her loss. She was his compass and he suffered greatly without her guidance.

He leaves his three children, David, Kathy and Christa, his grandchildren, Amanda and Andrew Giles, Anna and Sarah Mackenzie, his daughter in law Carol Derk, his son in law Hector Mackenzie, his two sisters in law, Sue and Dolly Giles, and many nieces and nephews, all of whom were entertained by his often embellished, and ever-changing, stories. He also leaves his dear friend, Sharon Isac, whose support and friendship enriched his life immeasurably. Predeceased by his beloved wife Anna Por and dearly loved brothers, George Giles and Jack Giles.

We thank Sharon for her care and friendship over many, many years, Vanasa for her care and her family’s support, Harry's diabetes nurse, Suzanne, friends and staff at the Wexford Residence, along with Dr. Abdulhussein and the team of gentle, caring palliative nurses at the Scarborough General Hospital who helped to alleviate his suffering and ease his transition. He died listening to Mozart.

Memorial donations to the Canadian Cancer society (with a focus on Breast and Ovarian, as it runs in his family and broke his heart) or the Diabetes Foundation.

A memorial will be held at a later date.

We would love to read your memories and comments.

I first met Harry Giles when he interviewed me for a job as Chemistry teacher at TFS. This was in London, England when my husband was being transferred to Toronto for his job and Harry was on one of his peripatetic journeys around the World investigating different education systems. His hotel suite was full of bloody towels because he had managed to put his hand through a glass fitting when he was having a shower the previous evening. He was very groggy because he had spent the night awake in hospital and he was clearly in pain. He offered me the job within 5 minutes of talking to me and signed an offer with his left (non-dominant) hand (I was rather concerned that his signature would be recognized.!) I spent 3 hours with him before putting him on a train to Cambridge. Several months later I turned up at TFS for the beginning of the school year, when I met my boss, the Head of Chemistry, who had never heard of me, nevertheless I finally made it into TFS, and stayed there enjoying many crazy times until my retirement 17 years later! Thank you, Harry!

It is with a deep sense of honour in having known Mr. Giles that I write with deepest sympathies for the entire extended family. I was fortunate to meet Mr. Harry Giles when I first arrived in Canada with my husband and 2 young daughters. I remain grateful for having been given the opportunity to send my daughters to a school with a level of education that was insurmountable. I was later hired to work for the Giles School where I worked for more than a decade. The team at the Giles School was so tight-knit and we all felt like family. I send messages of consolation on behalf of my family, and the entire Giles School staff.

One of the truly “heroic citizens” - in Section 1 parlance (section1.ca). His unmatched idealism, cultural and educational ambition, unwavering determination and resolve, incredible foresight and, above all, his belief in the critical importance of an enlightened citizenry as fundamental to a just, decent, prosperous and successful civil society, made him one of our greatest Canadians. Sadly, he was so far ahead of his time and such a visionary that most educators and policy-makers just didn’t get it! And his ambitions for us were often greater than ours were for ourselves. He certainly set an example that I have looked to for inspiration and guidance my entire life. My deepest condolences on your loss, Kathy (and Giles family).

Donate in the memory ofHarry Giles

We will be holding a memorial service at a future date when Covid conditions permit a larger gathering, or a gathering outside.