What Are the Last Rites? 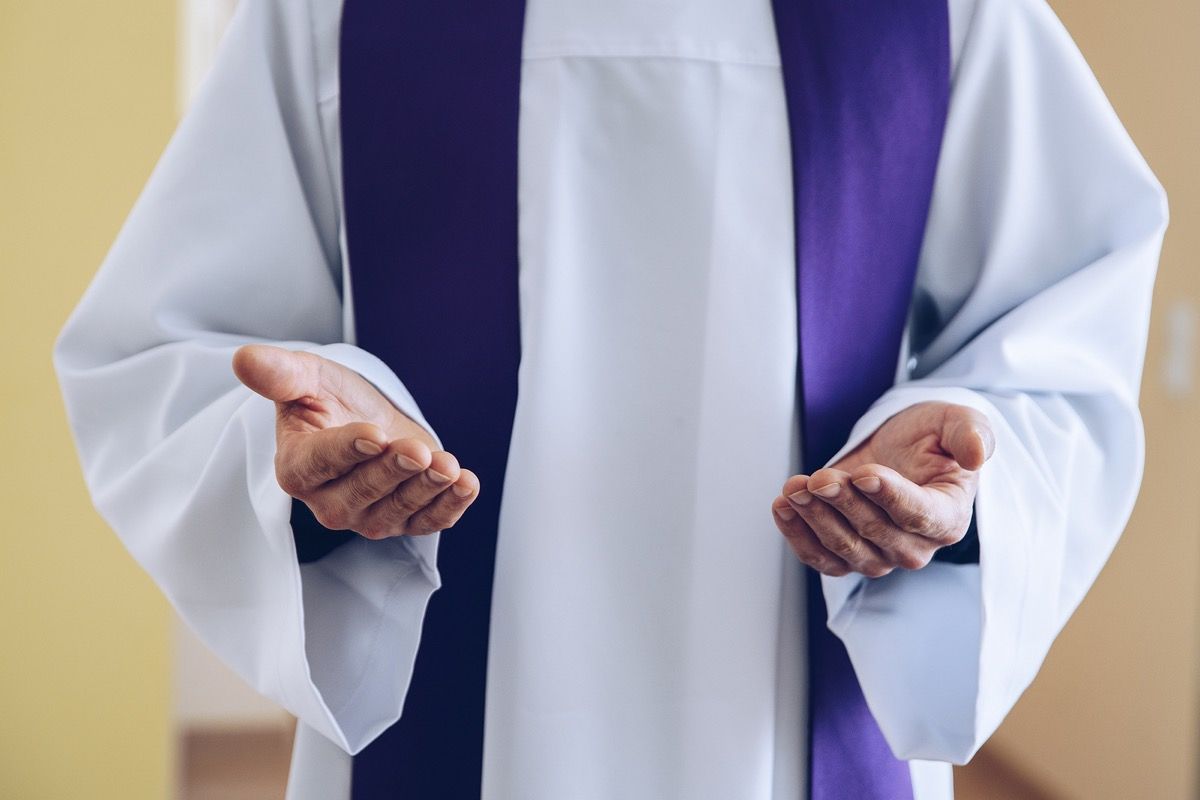 Most cultures and religions have customs and rituals related to death and dying. For Roman Catholics, this custom is called the Last Rites, a final blessing given to a dying person to prepare them for heaven. Below is everything you need to know about the Last Rites sacrament.

What are the last rites?

In Roman Catholicism, there are seven sacraments that members of the faith can receive throughout their lives. They include:

Three of these sacraments – Reconciliation, Anointing of the Sick, and the Eucharist, or Final Communion – are considered Last Rites, or Viaticum.

Reconciliation, Anointing of the Sick

Reconciliation and Anointing of the Sick are classified as sacraments of healing.

Reconciliation, or Penance, is done through the act of confession, in which members of the church confess their sins and ask for forgiveness.

Anointing of the Sick is given to those who are sick or dying. It is meant to provide the person with strength and faith in their struggle and bring forgiveness of sins.

Baptism, the Eucharist, and Confirmation

Baptism, the Eucharist, and Confirmation are classified as sacraments of initiation. Baptism is the first introduction into the Catholic Church, often occurring just after birth. The Eucharist typically happens a little later in life, during the First Holy Communion ceremony. In this sacrament, members of the church symbolically receive the body and blood of Christ for the first time. Confirmation signifies the Confirmation of one's faith.

When did the term Last Rites originate?

Last Rites have been performed on the dying for many years. It was given the name because it was traditionally given to people in the final moments of their life. It was viewed to help send them into the afterlife. However, it is now considered a way to help prepare someone for death and the judgment that Catholics believe will come afterwards. For this reason, Last Rites are not limited to the last moments of life.

When are Last Rites performed?

The purpose of Last Rites is to cleanse the soul of an individual who is sick or dying and prepare them for their journey to heaven. Traditionally, this was done on people's deathbeds. However, Last Rites can now be performed on those who are elderly, ill, or undergoing a potentially life-threatening medical procedure.

For this reason, Last Rites can be performed almost anywhere. It depends on where the need is and if the priest can get to the location. In exceptional cases, such as with COVID-19, the ritual can be adapted to take place virtually.

Certain aspects of Last Rites are also available at any time. This includes Reconciliation and the Eucharist. These are often available several, or most days of the week at churches and other Holy venues. Anointing of the Sick, however, is reserved more for those in danger of death, or who are close to death.

Who can perform Last Rites?

Last Rites are performed traditionally by Roman Catholic priests and are part of their responsibilities and duties within the Catholic Church. However, if a priest is unavailable, the sacraments can also be performed by a bishop, deacon, or trained layperson (a non-ordained member of the church).

Deacons or laypersons only perform Reconciliation and Anointing of the Sick in extreme circumstances. However, Communion can be given by almost anyone if a priest can not get there in time.

Who can receive Last Rites?

Last Rites are available to all members of the Catholic Church. However, it is often at the discretion of the priest.

The ritual begins with the priest addressing the dying or sick individual. He will speak with them to determine if they can participate in the ceremony. He will also decide which parts of the ceremony the individual is entitled to receive. If they were an active member of the church, they would likely receive all aspects if they are capable. If they are not Catholic or capable, the rites will be adjusted accordingly.

However, it is important to note that there is no limitation to how many times a person can receive Last Rites. The church urges members not to wait until they or their loved ones are on their deathbeds to request Last Rites. Instead, they encourage members to call whenever death is possible or imminent.

How are Last Rites performed?

The timeline of Last Rites can vary depending on the capabilities of the person receiving the sacraments. For example, if the individual cannot speak, certain aspects can be tweaked or excluded from the sacrament. Nonetheless, it usually takes the order of Reconciliation, Anointing of the Sick, and then the Eucharist.

The ceremony begins with the sign of the cross. Next, if the individual is conscious and able to speak, he will administer Reconciliation or confession. This involves the sick or dying person confessing their sins to the priest. The priest will then ask God for his forgiveness. In some cases, the individual will be asked to do an Act of Penance, which is typically the reciting of a few short prayers. This serves as a time for reflection and allows the individual to make up for the sins they have committed.

If the individual is not conscious or cannot speak, the priest will lead with an Act of Contrition. This is a prayer recited to repent one's sins and ask for forgiveness. This is also something those who are not Catholic can participate in.

The prayer used for the Act of Contrition can vary slightly depending on location and denomination. However, the modern example is as follows:

My God, I am sorry for my sins with all my heart.
In choosing to do wrong and failing to do good,
I have sinned against You Whom I should love above all things,
I firmly intend, with Your help, to do penance, to sin no more, and to avoid whatever leads me to sin.
Our Saviour Jesus Christ, suffered and died for us.
In His name, my God, have mercy. Amen.

Next, the priest leads the person in the Apostle's Creed. He may also ask the individual to review the Baptismal promises or offer to Baptize the individual if they choose. Non-Catholics are welcome to participate in this part of the Last Rites.

The Apostle's Creed varies slightly depending on the location and denominations. However, the version used in the Roman Catholic Church is as follows:

I believe in God,
the Father almighty,
Creator of Heaven and earth,
and in Jesus Christ, his only Son, our Lord,
who was conceived by the Holy Spirit,
born of the Virgin Mary,
suffered under Pontius Pilate,
was crucified, died and was buried;
he descended into hell;
on the third day he rose again from the dead;
he ascended into heaven,
and is seated at the right hand of God the Father almighty;
from there he will come to judge the living and the dead.
I believe in the Holy Spirit,
the holy catholic church,
the Communion of Saints,
the forgiveness of sins,
the resurrection of the body,
and life everlasting.
Amen.

After reciting the Creed, the priest will begin the Anointing of the Sick. This involves the priest anointing the individual, or group of individuals, with Chrism, a consecrated mixture of oil and balsam (made or declared sacred). It is used for anointing in several sacraments.

This sacrament can be administered to non-Catholics, under certain circumstances. First, they must be baptized and in danger of death. They must also be able to approach a priest and ask for the Catholic sacraments. If they do not fall under these circumstances, the priest may use olive or seed oil to anoint instead of Chrism.

Next, the priest will recite the Lord's Prayer (as below). Again, the individual and those around are encouraged to participate if possible.

Our Father,
Who art in heaven,
Hallowed be Thy name;
Thy Kingdom come,
Thy will be done on earth as it is in heaven.
Give us this day our daily bread;
and forgive us our trespasses as we forgive those who trespass against us; and lead us not into temptation, but deliver us from evil.
Amen.

Finally, the priest will offer the Final Communion, also known as the Viaticum ("provisions for a journey"), to the dying individual (if capable). This is viewed as the food to begin the journey into the afterlife. If they are unable or do not qualify to receive the Eucharist, the priest will provide them with a blessing.

The ceremony concludes with final prayers and blessings. The priest chooses these. He will often try to select ones that apply to the individual's situation.

If someone is very close to death, Apostolic Pardon may also occur. This is not a sacrament or part of the Last Rites. However, it is a blessing that absolves the individual from punishment for their sins. This, too, is at the discretion of the priest.

Why are Last Rites performed?

As mentioned above, Last Rites are performed to help prepare an individual for their journey into the afterlife. It is meant to be a final cleansing of a person's soul. During the process, they will confess and be absolved of their sins so that they may enter heaven instead of hell. Essentially, it is preparing a person's soul for their final judgment.

The tradition of Last Rites is exclusive to members of Roman Catholicism. However, other sects of Christianity have similar rituals performed on an ill or dying individual,

In Eastern Orthodox Churches, they follow the Byzantine Rite. This begins with the Sacred Mysteries of Confession, similar to the sacrament of Reconciliation. It involves a member of the faith confessing their sins and asking for forgiveness. The Pastor offers this forgiveness in the name of God.

Next, the individual will receive Holy Communion. After Communion, prayers known as "The Office at the Parting of the Soul From the Body" are recited. This consists of a blessing, the usual beginning (series of prayers part of the Byzantine Rite), and the Lord's Prayer found in Psalm 50. A hymn is then performed, asking for forgiveness and mercy from God. Finally, the ritual concludes with three prayers recited by a priest.

There is an alternative rite called "The Office at the Parting of the Soul From the Body When a Man Has Suffered for a Long Time." This is the same as the ritual above, except Psalm 70 and Psalm 143 are said before Psalm 50. The words in the hymn and final prayer are also different.

Lutheran Churches refer to Last Rites as Commendation of Dying. This, too, begins with the sign of the cross. It also includes prayer, reading from psalms, litany (a form of prayer consisting of petitions, usually recited by the priest and responded to by the individual) of, prayer for the individual dying, and reciting of the Lord's prayer. The individual will then be anointed with oil and receive Holy Communion and Holy Absolution (the word for confession in the Lutheran Church.