What is the Capsula Mundi Body Pod or Urn? 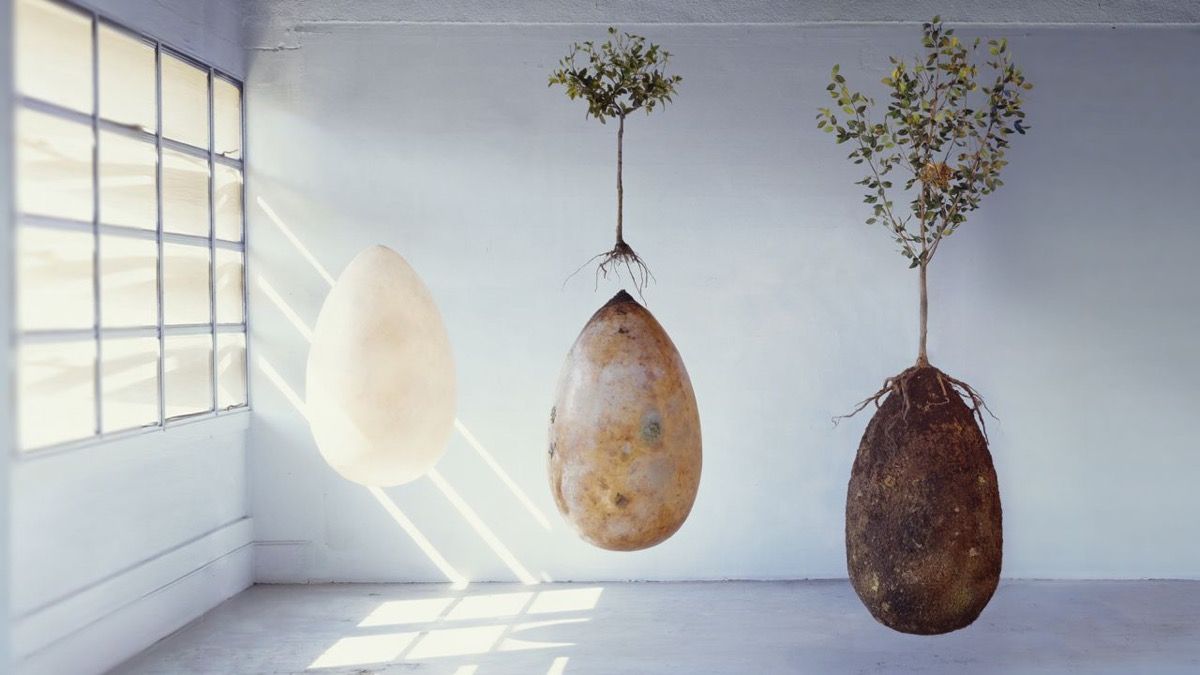 Many people want to choose final disposition options that are less damaging to the environment when they die. What better way to do this than by providing nutrients to help a tree grow? The technology already exists for cremation ashes using the Bios Urn; however, the creators of Capsula Mundi are working to bring this green practice to burials as well. Learn more about the project and how tree burial pods work (as well as their version of a tree urn) below.

What is Capsula Mundi?

Capsula Mundi, which means "world's capsule", is a project to create tree burial pods. These egg-shaped pods are designed to use the natural process of decomposition of a dead body to help a tree grow.

The project was started in the early 2000s by Anna Citelli and Raoul Bretzel. It was inspired by when the pair reviewed design trends while visiting Milan's "Salone del Mobile", a fair that showcases furniture pieces from designers worldwide.

The two entrepreneurs noticed that many of the exhibits did not consider their designs' practicality or potential environmental impacts. Much of the furniture was also trashed after the event was done. This experience prompted the pair to reflect on materialism and the over-saturation of objects in everyday life. They noticed that most things we own remove us from nature or focus on youth. At the same time, the concept of death is often forgotten or seen as taboo.

The experience at the fair prompted the two founders to reflect further on death and ways to make the process more friendly to the environment. They believe that death is not an end. Instead, it is the beginning of the journey back to nature. And it was during these reflections that they began redesigning the concept of  "coffin".

The Capsula Mundi project was first introduced in 2003 at the Salone Del Mobile design fair. Many of the pieces showcased at the fair focused on redesigning comforts in life, so the team found it challenging to present a project about death. However, their exhibition garnered interest from many like-minded individuals who wanted to remove the stigma around death and dying.

Since the initial introduction, the project has been displayed at several exhibits internationally and has garnered interest from people worldwide. However, one of the aspects holding the project back is its legality. The burial pod is not permitted for funeral use in Italy where the designers are from. The team aims to change this.

Green cemeteries continue to pop up across North America and Europe, and the Capsula Mundi team is hopeful Italy, will follow suit. Until then, the team continues to work towards promoting the idea, advocating for the changing of laws, and changing the way people think about death. The project is still in the start-up phase, but removing these obstacles may help make burial pods a reality. Until then, they offer a mini version of their capsule design that can be used for cremated remains.

How does the Capsula Mundi burial pod work?

The Capsula Mundi is an egg-shaped burial pod made from biodegradable material, designed to help provide nutrients to a growing tree during decomposition.

The deceased's body is set in the fetal position and placed in the burial pod after death. This needs to be done either before rigor mortis sets in (2 to 5 hours after death) or after the 24-84 hours when rigor mortis releases and the muscles lose their rigidity. Rigor mortis is a post-mortem process caused by chemical changes in contracted muscle tissue that makes the body joints stiff.

Next, the pod is buried in the ground, and a tree will is planted on top. The entire plot is filled with soil to the ground level. Thereafter bacteria in the soil begins to break down the body and the pod. This process transforms organic matter into nutrient elements such as nitrogen, phosphorus, potassium, and sulfur, which help the tree grow.

The family of the deceased person needs to tend to the tree as it grows, as more trees are planted around it, creating a type of green burial site consisting mainly of trees. These sites eventually grow into woodlands and are referred to as sacred forests.

How does the Capsula Mundi urn work?

Capsula Mundi urns follow a similar process to the burial pod. The urns are made from a biodegradable bio-plastic polymer designed to incorporate ashes into the soil.

Cremated remains are added to the urn by unscrewing the bottom plate. Next, the urn is buried in a hole measuring 70 cm (28 inches) deep and 30 cm (12 inches) wide. The urn is placed in the bottom of the hole and covered with soil, leaving enough space for the tree's roots. The tree is then placed on top, and the hole is filled to ground level.

After burial, bacteria in the soil starts to break down the bio-plastic and slowly disperses the ashes into the ground. This ensures that the ashes do not impact the soil in a way that hinders the growth of plants. All that is left to do thereafter  is water the tree and ensure its healthy development.

You can see how the urn is used in this video: https://www.youtube.com/embed/oB9vWt-wn4M.

How much does the Capsula Mundi cost?

Since the burial pods are not yet available to the public, pricing has not been set. However, the urns are available for purchase online at $370.00 USD ($462.59 CAD), with free shipping.

Capsula Mundi urns come in white or brown. The brown urn is uneven, "creating a more natural effect," according to the website. This creates a speckled look. The white urn comes in a pearly colour that is slightly shiny with a satin finish. You can also find a "sand" urn on the site. It is an off-white/tan colour with an appearance similar to sand. However, it is made from the same material (bio-plastic) as the other urns. All variations are made in Italy, and shipping is available worldwide. Note that a tree is not included. You have to source it separately.

Is the Capsula Mundi legal in Canada and the United States?

Capsula Mundi urns are legal for use in Canada and the United States and can be buried in any location that allows for interment in the ground. This can include cemeteries, at sea, and public or private properties. However, it is important to check local regulations to ensure compliance with any rules or bylaws.

Since the Capsula Mundi burial pods are not yet available for sale (as of the Spring of 2022), it is not clear if they would be allowable in both countries.

However, based on what's known, they could become accepted as a form of green burial at designated green burial sites. In Canada, for example, Capsula Mundi would fit the criteria for a green burial since the body is placed in a biodegradable container and as long as embalming and other forms of preservation were not used. Planting a tree also aids in environmental conservation and protection, which is an important principle of green burials.

Questions about Capsula Mundi products can be directed to the contacts on their web page: https://www.capsulamundi.it/en/contacts/. For all other questions about sustainable funerals in Canada, including cremation or aquamation, contact our team at support@eirene.ca or to make arrangements with Eirene for yourself or a loved one, click here.