What is Interment? Learn About Final Resting Places 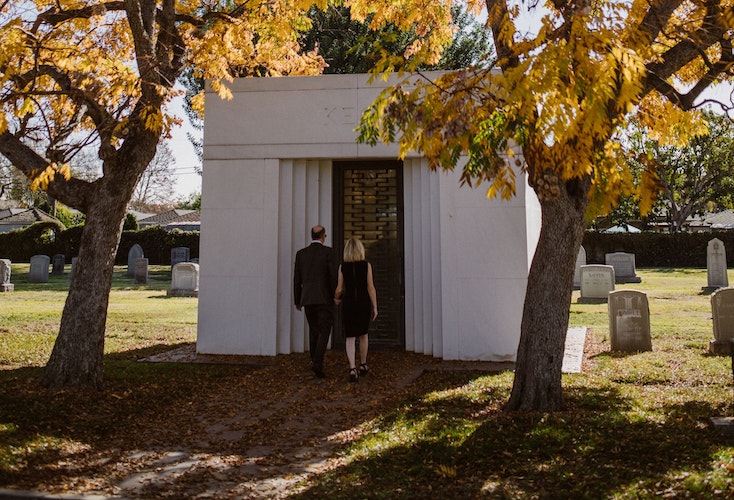 Learn what interment is, and what types and options you may encounter when planning a funeral. We define the terms and outline examples in this post.
4 minute read

When planning a funeral you will likely come across the term "interment". This article will explain what interment is and what interment options there are to choose from when making funeral arrangements.

Interment is the ceremonial placing of a deceased person (or any living creature that has died) in a grave. A body in a casket or coffin can be interred. So can cremated ashes.

Although it is common to hold a ceremony or service before committing remains to a final resting place during the internment, it is not the same as a funeral. A funeral is also a ceremony to honour the deceased, but it can occur almost anywhere. Interment is the ceremonial act of placing the deceased in their grave and only occurs at the gravesite.

Interment of a body

When an individual’s body is placed within a casket or coffin, interment often occurs in a grave cut or a burial vault.

A grave cut is a dugout area in the ground where a casket is placed and buried. In addition to the casket or coffin, grave cuts may also feature artifacts and souvenirs (e.g., pictures, flowers, etc.) related to the deceased. This process is considered interment in the ground or burial.

Burials also often involve funeral services such as a visitation or viewing beforehand, and it is common to hold a small service before the body is lowered into the ground. Afterward, the soil is returned to the grave cut, and it is filled to be level with the ground or mounded. Finally, a headstone is typically placed over the grave. (See more in this post about different grave markers.) In most cases, the headstone is a grave marker that contains personal information such as the deceased name, date of birth, date of death, and inscription.

The most common location for a grave is at a cemetery. As such, families would purchase a grave plot and burial rights from a licensed cemetery if choosing interment.

If the deceased person indicated before death that they wanted to reduce their environmental impact with burial, they may also opt for a green burial. Green burials do not use embalming fluids or toxic chemicals, and bodies are buried in biodegradable caskets (e.g., wicker) or wrapped in a shroud made from biodegradable materials.

This type of burial allows the body to decompose naturally and incorporate back into the earth. Grave plots can also be reused over time. Unlike cemetery plots, visitation at green burial sites is not usually encouraged or allowed. The plots, instead, become a space for plant and animal life.

A burial vault is a structure built within the grave that holds one or many remains. An example of this would be a mausoleum.

A mausoleum is essentially a large tomb. It is a monument, often made from stone, designed to house the remains of one or several individuals above ground. Like burials, mausoleums are common to contain personal mementos to markers related to the deceased.

There are many types of mausoleums. Common ones include:

When a deceased person’s body is cremated, interment can also occur at a grave-cut if the urn is buried or in a burial vault. Common burial vaults for urns include niches and columbariums. Alternatively, some may opt to scatter ashes instead.

Grave cut for urns vs. caskets

Burial for a casket and an urn are relatively similar. Services are often held beforehand and before burial, and it involves purchasing a burial plot and burial rights from a cemetery. One of the main differences is that the interment of urns and ashes is not time-restricted.

Casket burials are usually held within a week or two after body preparation. By contrast, urn burials can be held days, months, or years down the line.

Cemeteries often offer various types of plots, including single, companion, or family. Most of which can hold at least two urns, while others may hold four or more.

Depending on local laws and regulations, some may opt for burial outside of a cemetery. If choosing this option, it is essential to consider the location carefully, since it may change or be sold in the future.

For urn burials within or outside of a cemetery, it is best to use a biodegradable urn so that it decomposes over time. A unique option you can choose is to combine ashes with seeds or a tree sapling to grow into a tree in later years. See this Bios Urn, which becomes a tree.

A columbarium is like a mausoleum. It is a structure used to store and often display urns containing cremated remains instead of caskets or coffins containing deceased’s bodies.

The structure is typically a wall, room, or building made from brick or concrete that can be found indoors or outdoors. It often has designated areas called niches. A niche holds the urns and has features that help remember and memorialize a loved one.

Columbariums are usually located in cemeteries, but they can also be found in churches, crypts, outdoor monuments, crematorium sites, and more. They can be structures that stand alone or are part of other burial monuments, such as within a mausoleum.

Columbariums and niches can vary depending on the location, but common types include:

Niche style also varies, but the most common variations are:

Have a funeral question?

To learn more about funeral processes, cremation, and related information - or make funeral arrangements - you can reach our funeral experts at Eirene Cremations. Click here to contact us.